Doing Disney With A Disability Part 1

We made to Disney

We made it through Disney (unscathed for the most part)

We made it home (unscathed for the most part)

And now here we are.

We drove to Disney so Bear could take his big oxygen concentrator.  The car was full on the way down with suitcases (small on for the trip down and back… two for there… cooler… rollator… and the big blue machine…).  The trip down was pushing hard but we made it in time to take a nap and make it to The Sleuth for dinner and a show.  It was a good mystery theater show.  The butler didn’t do it.  There wasn’t a butler, so… that was pretty much a given.

We stopped in Rock Hill South Carolina at a Comfort Suites.  We didn’t have reservations but the hotel had vacancies so we stayed.  The room was immense, full kitchen (which didn’t mater the least since we would be there about 8 hours tops), tons of room, sofa, desk and a huge bathroom.  If we drive this again, we are definitely staying there again.

The hotel we stayed at in Celebration Florida, on the other hand was less amazing.  It had about six handicap parking spots which was good.

The hotel we stayed at was RIGHT next to Old Town.  The view from the window when we got there was really nice.

When we got back to the hotel from the dinner show there was NOWHERE in the hotel parking lot to park.  So we drove around the parking lot for about half an hour waiting for someone to leave.  Mental note… not the best place to stay.  What made it worse… the drapes on the windows were made to not be able to be shut… they were there for decoration… the window was the entire width of the room… there was a DELIGHTFUL streetlight RIGHT outside the window… you could read a book, easily, with all of the lights in the room turned out.  I will NEVER EVER EVER stay at Comfort Suites in Old Town again.  I would never recommend staying there to anyone else, either.

It turned out I was really glad that I packed instant coffee to bring with me.  It came in very handy during the trip.  I was going to bring the single serving packs (and I did bring a few) but it turned out that a small jar was a better price and I know I can refill it with the instant I have at home for emergencies.

I swore once I got a coffee maker that I would never end up drinking instant coffee.  It isn’t half bad and I will often settle on that even before I will make a K-Cup version.  It all depends on the day.

We headed out to check in to our room for the first night at Disney.  We didn’t have plans for the day, we were going to pretty much wing it.  Maybe Disney Springs… nap… relax… until it was time for Mickey’s Backyard BBQ.  This night we stayed in Port Orleans River View.  I am SO staying at Port Orleans next Disney Trip.  It costs a bit more than where we usually stay, but it is SO worth the difference in price.

They actually had a room for us ready.  It wasn’t “handicap accessible” but it was on the first floor and only about 100 yards from the parking lot.  It was quiet, trees everywhere, with a creek running through the property.  There were “watch out for snakes and alligators” signs all along the creek, but the water was still and the birds were plentiful.  The walk to the cafeteria wasn’t long, was also tree covered, and (over the bridges) passed the pool, the fishing spot, and a couple rope hammocks.  Yeah…. I really like the extras at Port Orleans.

Only thing that was missing was any towel art.  I wish with all of my heart that we ever got a mousekeeper who left us towel art. 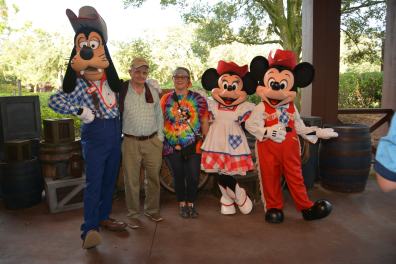 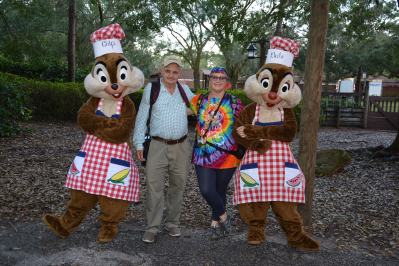 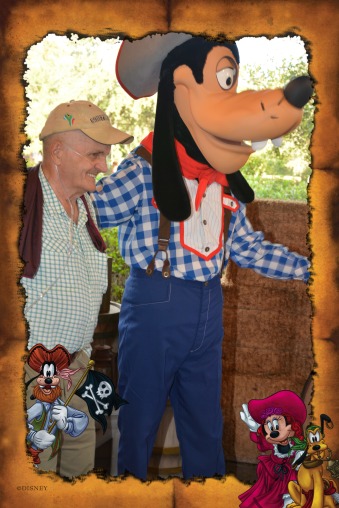 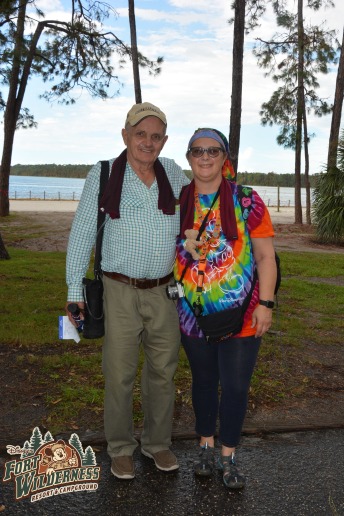 Mickey’s BBQ was a little different this time.  They seated you at a table rather than turning everyone loose to fend for themselves.  This was good at the start because you didn’t have to fight for a spot, but it turns out that people are just freaking rude and will shove you out of your seat and hog up all of the paper towels just because they can.

They now have three “dance floors” and the characters take turns dancing at each of the floors.  That means that sometimes Mickey Mouse was dancing with only a dozen kids off to the side rather than the hundred or so on the “main” dance floor.  There were Photopass people to take pictures with the characters.  I was surprised that we got our pictures taken so easily with Mickey and Minnie, Goofy, and Chip and Dale.  Dinner was picnic food as always, but there is now an open bar so you can gave all of the beer and wine you can consume in an hour or two along with your picnic food.  It was good that there was actually Coke to drink now rather than just water and ice tea for those of us who can’t (or chose not to) join the HUGE line at the bar to be one of the lucky drunks on the Disney busses back to the parking lot.

We cut out a little early (30 minutes maybe) to avoid the rush to the busses.  Bear figured it wasn’t going to be pretty trying to navigate with his rollator to the busses with a herd of drunk party goers and it was nice to have a nearly empty bus to ride back in.  We actually got to see the camp sites at Fort Wilderness.  There were RVs that had their spots all decked out with Halloween decorations, inflatables, and the like.  It was a nice ride back and we got back to the car just in time to see a really lovely sunset.

I’m incredibly grateful for GPS in the car, though.  If I had had to deal with maps, the trip back to the hotel would have taken twice as long.  GPS found us short cuts that I will have to remember later.