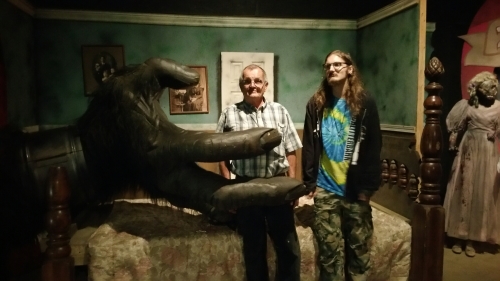 So, here I sit, in the quiet of not quite dawn on Sunday morning.  I have coffee (yes, pumpkin creamer… in Sheetz Winter Blend… it’s interesting).  I have taken a long hot bath to help ease out the achies of the morning.  I am sitting listening to the cloven hoof falls, somewhere over in the thicket, of the deer making their way back to the woods from their night of grazing and foraging.  Peanut is snoring softly.  Herman hasn’t started his round of scratching all of his favorite posts.  Chili is on cooking.  And I have an amazing candle to keep me company.  It was infusion week so my fingers are starting to work normally and my ankles didn’t hurt long after my bath.

It is a good morning.

Yesterday we went to pick up the car from where they were putting the paint ‘tint’ on to protect the front end from chips and dings.  Stopped at the Dollar Tree where I found TONS of marbles (the clear, see through, kind in many colors… forest green, navy blue, gold, white) that I knew would fry up nicely and crackle to make my pending kaleidoscope even more awesome. Went to the second hand store where I scored a large sweater in the most interesting shade of black shot with tiny silver threads (which is on its way to being unraveled to make hats and lens buddies for Squirrel’s camera) and a coffee cup (I’m starting to think I’m a lot like daddy) from Disney MGM studios… been some time since it was MGM… made me smile.

Hit the library book sale where Adam and Travis hauled off all of the comic books they could carry.  The comic books prompted many squeals of delight through the afternoon as they paid $1 for each and several are in pristine condition and will make an awesome start to the stock for their comic book store.   They hauled home two bags early in the day and went back a second time to score as many of the rest of the books as they could.  I have to admit, they are pretty and will make a fine way to start out the business.

I upgraded my desktop to Windows 10.

I fried my marbles and they are sitting in a strainer waiting for me to cull through them to find the ones I want the most for my toy.  I talked to the lovely woman in Florida who’s husband is making it.  It’s had me thinking a lot the last few days.  The marbles honor Aunt Bea (who taught me how to make fried marbles when I was very young).  The man making my kaleidoscope has throat cancer that has metastasized.  His scopes are incredibly beautiful.  There was one that was a bi-plane made from stained glass that was incredibly stunning.  He showed his wares at the Michigan Ren Fest last year and has a cart this year (they rented out their booth) but weren’t there the first couple weekends… so they are going to mail me mine as soon as he has it built.

Went to Factory of Terror in Canton.

In general, yesterday was a rather unproductive day, and it was awesome.

Today looks like it will turn out to be much the same.  I will finish making the chili, put the laundry away and work to clean up the mess in the bedroom and bathroom.  I may work on writing projects that I have in the pipeline.

It would have been an amazing day to go ride bikes, but I think we needed a do nothing day today (or do not much) and next weekend maybe go back to Amish country to see the changing leaves.  The apple trees along the bike trail will smell incredible and it will be so much more comfortable to bike when it isn’t so humid.

So for now… my hawk has awoken… my chili is heating through the last of the cans of beans… my coffee is almost gone… and it promises to be a beautiful day.  Maybe we can squeeze in a nice long walk today.  Maybe even down to the library to see what I can cram into a bag for a dollar.