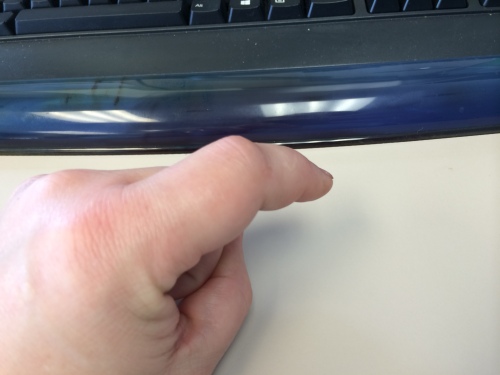 No, mom, the picture isn’t from now, it’s from a couple years ago… just making a statement.

That said… trying hard doesn’t keep me from being terrified.  I’m terrified.

I read caps on coverage.

I read the rhetoric and the realities.

If there is a million dollar cap on lifetime benefits… and I ONLY get my orencia infusions… those magic biologic treatments that keep me functional… at 10,000 billed to my insurance a month… that leaves me with just over 8 years.  8 years of being able to be a functioning tax paying contributing to society citizen.

There has to be an irony in the fact that 8 years will take me to the maximum possible term that Trump could see.

I hear the people in the infusion center talk about what EACH of their treatment actually “costs” if it isn’t covered.    Fifty thousand dollars a week for one treatment.   They get to live almost 6 months (because their treatments are keeping them ALIVE not just keeping the hot glass shard feeling out of their fingers or their fingers pointing in the same directions, or their knees from being the size of volleyballs).

I’m trying to not be reactionary

Acne is a pre-existing condition

People who had cancer 15 years ago and are not clean and clear… they have a pre-existing condition.

And don’t even get me thinking about how much the fact that a woman is born with the wrong anatomy to matter.  <<it’s been a LONG exhausting week and I might just tell you>>

I don’t want to be reactionary… but…

States could apply for waivers that would allow insurance companies in their states to do three things: 1. Charge older people more than five times what they charge young people for the same policy; 2. Eliminate required coverage, called essential health benefits, including maternity care, mental health and prescription drugs, that were required under the Affordable Care Act; and 3. Charge more for or deny coverage to people who have pre-existing health conditions, such as cancer, diabetes or arthritis.

The waivers could also impact people with employer-based insurance, because insurers could offer policies that have annual and lifetime benefit limits, which are banned under the Affordable Care Act, and some companies may choose those policies for their workers to lower premiums.

I’ve considered moving to somewhere that will allow me to afford to exist.

Yeah… not being terrified and not being reactionary isn’t really working for me so much right now.