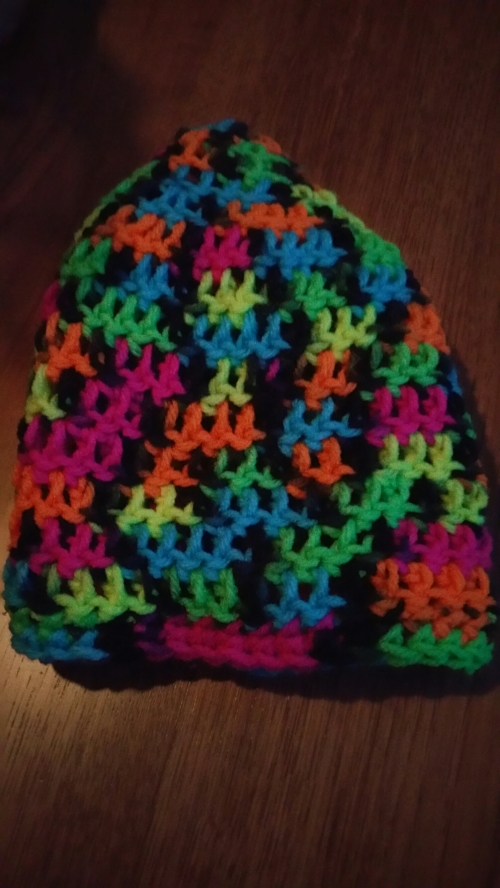 My second week post-op work from home is quickly coming to an end. Tuesday I saw my surgeon and he released me to go back to work on Monday. By Christmas I will be allowed to lift more than 10 pounds. I have a 22 pound turkey to make for Thanksgiving. This may be interesting.

I’m nearly to the end of my Red and Green and White paper chain scarf. It’s long enough to wear, but I would like another three or four links before it’s long enough for me to really like it. I wore it to my infusion yesterday and I got compliments on it! In my head, they were just being polite, but I accepted them. They made me smile.

When I was going to the infusion center on main campus, it was located right outside the Rheumatology department. I don’t know if that was by design or accidentally. But that’s where it was. It was just there. Safe. Kind of sterile to look at. Technologically awesome. Great people. But it was by the Rheumy’s office.

It’s easy to kid yourself about the infusion center when it’s where you can connect it to your illusions. The curtains create individual little rooms where you can hide with your infusion, enjoy some juice and crackers with the poison of your (your doctor’s) choice. Very illusion inducing. You’re just there and while there are people also there, they are just there too.

Yesterday, going to my new infusion center, my reality caught up to me.

The man next to me was having issues with his chemotherapy and was trying to decide if it was time to have a port put in to make his infusions easier to deal with. Fewer pokes and sticks. His wife was busy looking up the alternatives (gotta love smart phones), which ports would be most effective and most comfortable for him.

The woman in the chair on the other side of me was getting her poison with blood. She had a lot of trouble with her IV and they had to call in one of the surgical nurses to run hers. Hers was very painful. I tried to distract her while they were getting her set up. Her partner took their little girls for a walk so they didn’t have to watch. She is tied to her chair for two hours ever three months.

The woman with the awesome piercings across the room was there for about the same amount of time as me. She was neat. I hope she’s there again. I would like to get to know her.

On the counter under the TV there was a pile of neck pillows that someone had home-made and dropped off. There is a box of Teddygrams and a box of soda crackers. There is a fridge full of juices and Gatorade and diet soda. There is a box full of hats and scarves that people have made and dropped off. Most were fleece. One hat was crocheted in the most interesting colors. It called to me from across the room. It became mine. The pattern makes the colors look like puzzle pieces.

Reality, yesterday some, more this morning, kind of snuck up on me and took my breath away. I KNOW all about the drugs I take. I know what they are for. I know what they do. I know that without them life gets to be really nasty for me.

I don’t feel so alone somehow having sat through everyone else’s reality.  I’m really glad I switched.  I feel, somehow, more like I’m part of some weird ass community.

The hat came home with me. It’s a little scratchy… the yarn is kind of stiff. I’m going to try fabric softener… It wanted to come home with me to remind me of my reality. This morning I’m enjoying coffee and I’m thinking I might take a break from my computer to go take a long hot bath.

I am glad that I’m not yet to the point where I scare people with the way my hands look. I’m glad that I ‘only’ hurt as much as I hurt. Mostly I’m glad that I learned that I need to treasure every second because you never know when it will be your last.

Okay… so… I’ve finally bitten the bullet and switched my Rheumy to the one local my house rather than on main campus Cleveland Clinic.  My primary excuse for moving my location is the tremendous waste of time.

So I made the switch.  Now I go to the clinic location 1.5 miles from my front door.  It’s stone throwing distance from the mall.  Parking is free and walking is quicker than the rigamarole I was dealing with at the other location.  THOSE were the benefits I was aware of before.

Today, I got my first infusion at the new location.  The infusion center at main campus is shiny and new.  The chairs are brand new recliners complete with personal TVs.  Each chair has its own little room (curtains).  It’s very sterile and impersonal.  HIPPA would be very happy.

And here I am.  I’m in a hospital recliner.  One TV across the room.  Seven chairs side by side.  People in each chair.  Everyone hooked up to their own personal flavor of poison.  Everyone pretty much in the same boat.

Everyone else (all but the neat skinny lady in the far corner and I) have their company with them.  To my left the woman’s partner and their kids.  To my right, a man with a blue vomit bag being held by his wife.

I have Gatoraid and Teddygrams.
I have a toasty warm blanket and a pillow.
I have Wifi and my tablet and my Orencia.

I did it for a bunch of practical reasons.
I’m glad I did it because maybe glitzy and sterile aren’t all they are cut out to be.