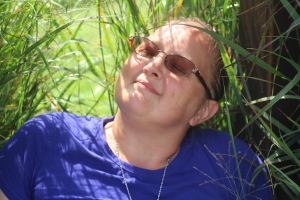 Okay… so… I guess I have never really sat down and really told my whole story. I’ve alluded to a lot of it. I’ve talked about some of it. But my whole story? Probably not so much.

I learned a LONG time ago that it doesn’t pay to complain when you don’t feel good. I hand the flu with a fever of 103 and was told I didn’t know how to read a thermometer (back in the day when they were mercury thermometers) and I was looking for attention. Until someone else bothered to look and I had the flu and a 103 degree fever. I was attention seeking again when I was a freshman in high school when I had a pain in my right lower abdomen. Because I could jump off of the exam table and land on my left foot without any weight on my right foot, I didn’t have appendicitis and I was looking for attention… until 2 weeks later when my white blood count (which they FINALLY took) was off the chart and when they did a laparoscopy my appendix was four inches long and ready to burst.

People don’t want to know if you don’t feel good. It interferes with their lives and you really don’t NEED any attention anyway. I figured the same thing out several years later when I ran my finger through an industrial sewing machine at the pants factory where I worked and the needle broke off in my finger and I needed x-rays. I was sent for x-rays and had to walk home to get the car to drive myself because I was really only looking for attention and it was probably only a scratch anyway.

I learned. Attention is very much not worth it. You suck it up princess and you just don’t say anything.

It should not come as much of a surprise that fifteen years later when I started to not feel right… to ache in not so great ways I just pretty much ignored it. In my defense, I had started working out at the gym and I had taken up running and it was really very easy for me to chalk it up to over doing things. I figured it was plantar fasciitis. I figured I was over doing it. I figured I should suck it up princess and just keep pushing on. So I did.

I had times when my feet swelled up enough that I had to loosen my Teva sandals. I had two weeks where I nearly couldn’t walk at all because my knee swelled so badly that I could barely bend it sufficiently to ride in the car. It hurt so bad I was wearing Crocs to work (NOT popular but at least they were my black ones). Walking three blocks took an hour and nearly made me throw up. When I rode in the car long distances, my knees screamed. When we went to Disney in 2009 my feet hurt so badly that I couldn’t make it through the whole day at the parks. I looked for puddles to soak my feet in. I loosened my Tevas. I was told I was pushing too hard in my running. I was down to walking fast and I wasn’t even doing that when we were at Disney. I was, at this point, training for my first Austin Half Marathon. I needed to train. I could barely walk.

But the “bring me to tears and make me want to throw up” pain always passed. I assumed it really was just doing too much. I had nearly given writing up entirely by this point because my hands ached all the time and I was getting tendonitis in my shoulder and my elbow routinely. I pretty much hung up crocheting for a while. I just assumed it was my new normal. Not something that I was proud of but it was what it was. I kept walking… kept training… and was exhausted by evening.

In the fall of 2009 I noticed a bump on the middle finger of my left hand. It was about the size of a pea. It was tender but not painful. It wouldn’t go away. I was hoping it was a cyst. I googled all kinds of ways (I was KILLER in my online retrieval class at Pitt) trying to figure out what it might be. One website I found said that if it was a cyst and you hit it hard with a book (about the size of a hardback Webster’s Dictionary) it would probably burst and you would be great.

When it stayed for two weeks, I sucked it up and went to the doctor.

The doctor I went to was not the normal one I saw. Dr Holly was out. I saw her partner. She poked and prodded the bump. She looked at my fingers and toes. She asked questions. She sent me for blood work.

Three days later, while I was at work, I got the phone call that I will never forget. I found out that my Rheumatoid factor was horribly high. I needed to make an appointment with a Rheumatologist. I was very VERY positive for Rheumatoid Arthritis and I needed to get started on treatment to try to control it as soon as possible.

So, what did I do? I googled it. NOT a good idea. DO NOT DO THAT!!! The pictures are not pretty. Worse, I realized that the great great aunt that terrified me when I was a kid had hands like the pictures. I’m sitting at work googling pictures trying not to go completely crazy. I went in the bathroom (into the BIG stall so I could sit on the floor) and cried and cried and cried.

I made the appointment and talked to the Rheumy in Austin. I miss her a lot. She was always there for my appointments. She didn’t bullshit me. She told me straight.

I was pretty advanced. She sent me for tests. X-rays… blood work… I had had active RA for at least 18 months, maybe 2 years or more. I already have some joint damage. My hands don’t look like the pictures on Google… but there is wearing away of the joints. I started Methotrexate (pills that made me dizzy, sleepy and puke every week) and I made up my mind that I may have RA, but RA doesn’t have me.

About a month after I found out that I have a forever condition, I got another phone call that I will never forget. My little girl was found on the ground in the parking lot at the high school after an apparent seizure. I had gotten to where I was fighting back with MY fight only to be presented with the fact that she has Epilepsy… another forever condition. Was my RA there to prepare me for the new adventures? It gave me the perspective to understand her new normal… her forever fight.

I walked my first half marathon. My beautiful son walked me in the last mile. I hurt so bad by the time I crossed the finish line I wanted to cry. My hips were screaming. It felt like hot ground glass in every joint from my waist down. I had to call off work the next day because I couldn’t walk. But I did it. I will never forget seeing him walking backwards through the course to meet me. He will probably never know how much that has meant to me… or how close I came to giving up by the time he found me.

My adventure has been interesting. It has taught me a lot. I’ve learned that I’m stronger than I thought I was. I’ve learned that stubborn determination has made me the hero of both of my kids… a fact that chokes me up ALL the time.

I’ve finished three Austin half marathons (two my son walked me to nearly the finish line, nearly in tears and one… despite having the flu… he hung my medal around my neck) and one Disney half marathon… and I’m working my way towards the Santa Shuffle in December of this year. I’ve gone from pills to shots of methotrexate so I don’t puke every week. I have tried multiple biologics and I’m now on Orencia and roughly every 4 weeks I go and have my infusion.

And here I am, almost exactly five years after I was diagnosed looking back at my adventure. I’m working on a geek book, and an RA book. I’m back to writing poetry and crocheting and feeling nearly human most days. I don’t take anything for granted any more. I’m strong for my family when I have to be and I fall apart when I just can’t not fall apart.

I’m glad I can be the voice of sanity for people. I’m glad I can prove that you don’t have to crawl under a rock and not live your life so people who hear the news… You Have RA… don’t fall into the freak out pit that I fell into. I hope I can keep being not only that, but that I can keep being my kids’ hero… and to voice of reason when people tell them that it is all in their heads.

So, why am I telling you all this?  Why now, after all this time?  What’s the point?  The point is, I’m a spoonie.  If you don’t know what that is, you can read about the Spoon Theory of Pain and realize what it is like to be a spoonie.  I wear a spoon necklace, a spoon bracelet and two spoon rings to remind myself that I need to save my spoons.  I need to be gentle with myself and save enough of me to get me through the day.  Some days that isn’t easy.  Some days it is surprisingly easy.  Mostly, I live in the moment because I only know what this moment is bringing.

No it doesn’t always work.

Ironically, the wearing of the spoons has brought me more attention to the reason I wear them and explaining my RA.  I have brought attention of the nurses at the infusion center… to the intern where I work… to several people who just wanted to know why I look like such a dweeb wearing spoons.  It’s also launched several conversation on why my son periodically jacks me spoons if they are particularly interesting.  I’ve grown quite a collection of interesting spoons.  They don’t help when I feel really really awful, but they remind me to try to same a little time for me.

And here I am, putting words and feelings to “paper” once again… this time so others know my story and maybe will tell theirs.  I’m trying to join The Elephant In The Rheum’s Spoopie Story Swap… because it matters.  Because we are all in this together and no one can have too much support…. or too big a voice to spread the information.

This entry was posted in rheumatoid arthritis and tagged my RA story. Bookmark the permalink.