It was an awesome race slash training run. I mean, seriously… training run with bling! What could be better?  It was a small enough race that it didn’t take fifteen minutes to cross the starting line but a big enough race that you didn’t feel like it was a bunch of people from work who decided to run together on a Sunday morning.  I’m pretty sure I will do this one again (although I may make it a half instead of a 10k next time).

Started out feeling really good.  The morning was fantastic.  Kind of on the damp side and cool enough that wearing a light hoody was comfortable.  Bear didn’t bring one and, riding on his scooter, he regretted it.  He looked really cute wearing my Figment hoody.  Walking kept me warm, but driving his scooter (given the speed he was going) made the trip from Tower City to the Rock Hall a bit chilly for him.  It was even worse when he was chasing the pigeons. 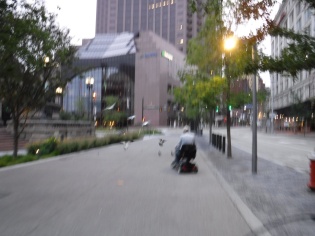 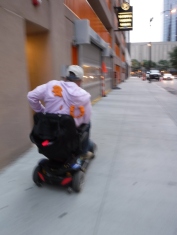 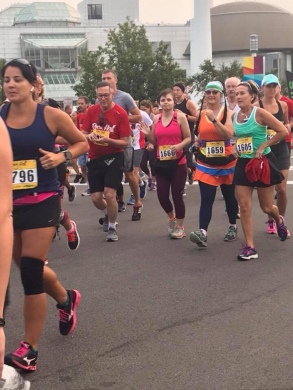 The only problem I really had with the race itself was that the half started at a different place than the 10k and 5k and finding where we were supposed to line up was a little less intuitive than some other races I’ve done.

It was kind of neat to see other people wearing getups too.  I absolutely loved the guy in the gorilla outfit.  He said he would so anything for a laugh.

Squirrel Girl was just a little stressed over the race.  She didn’t train so much and  was really feeling the stress lined up at the starting line.  She was worried about finishing at all… about finishing in under 3 hours… her knee giving her issues… she was stressing quite a bit. 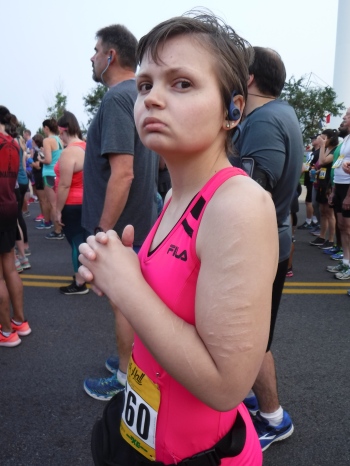 Turned out she didn’t need to stress all that much. She and I ended up finishing about one chip second apart. I would have beaten her by about 5 minutes but about mile 2.5 pushing too hard and the humidity absolutely made me feel crappy.  Crappy enough that I spend precious minutes being sick in the park.  NOT how I wanted to do this race.  BUT it did give me a reality check and make me slow down to a very fast walk the rest of the race.

I suppose Squirrel could have reminded me that you’re not supposed to push too hard too fast the way I remind her all too frequently, but I have to give her credit for not. 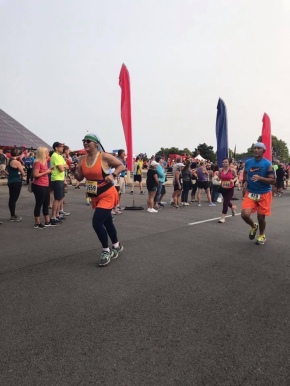 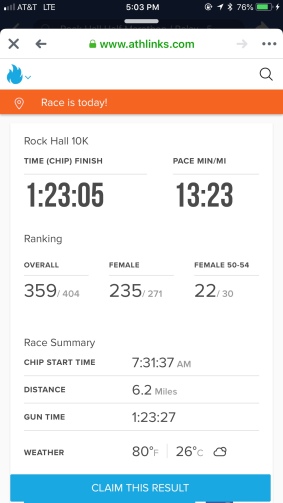 I have to admit though, that even slowing down (for me) and not having trained (her) didn’t really impact either of us finishing strong.

I went in to this race having my doubts. I was worried about the temperature and humidity in August, especially this year (it’s been really bad this year). I was worried about how my weight loss was going to play in to my race. But thanks to supportive people I met through WW who are as crazy (if not more so) as I am I’ve learned to listen to myself, to my body, and how to fuel my body for long runs… and not stress nearly as much as I have been over possibly eating too much or gaining back what I’ve worked so hard to lose.

Did we both push too hard?  Oh yeah.  Squirrel tends to be very light headed and shaky when she gets through most any finish line.  I know the last mile she was fighting to keep herself going.  I keep impressing upon her that she needs to take training a little more (than not at all) seriously so her body doesn’t get shocked by the race effort.  She did eat watermelon (me too… beat the heck out of even the thoughts of a banana)after the finish line.  But this morning her thighs and her abdominal muscles are complaining quite a bit.

Me?  Despite the fact that I should have finished sooner (I will plan better next race for feeling crappy), I felt really amazing at the finish line.  I finished strong and (yeah, I was tired) didn’t really feel like I wanted to pass out in the grass.  The ice packs that PNC handed out were very welcome as were the towels that one of the vendors was giving out (after I soaked it in ice water in the water pools at the finish line).

I’m proud of myself.

I’m proud of Squirrel Girl (and will now be highly harping at her to train better for February). 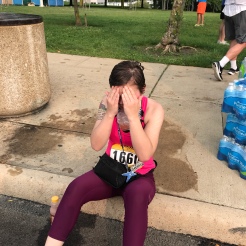 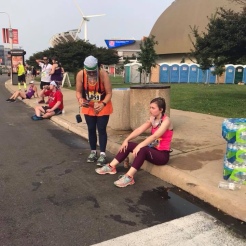 Amish Country 10k in just under 3 weeks.  With any luck, this race will be less humid and chillier.  If I can just keep timing my Orencia infusions so they fall shortly before races, I will be in pretty decent shape!

Posted in Half Marathon, running