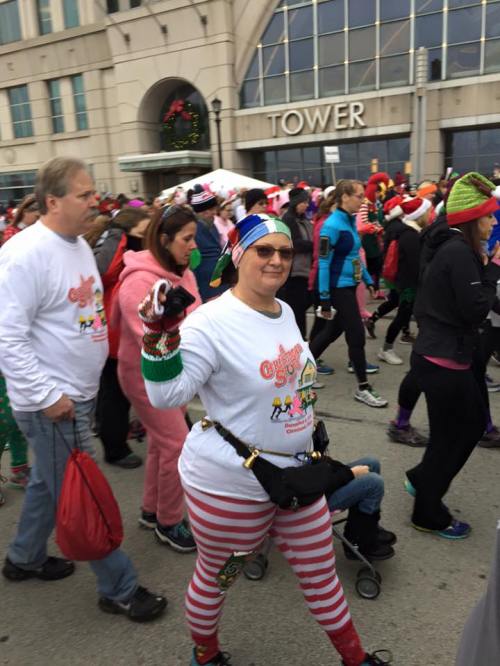 This has to be some kind of record, I think.  A race report the same decade as the race!!! 🙂 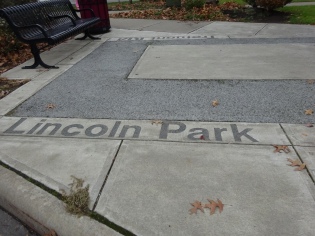 It was awesome to have company before the race… Bear was freezing (it was 35 and foggy) but was enjoying the people watching and looking forward to being inside Tower City Center in the warm for well over an hour.  The people watching was kind of awesome in this race.  People were dressed up in all sorts of get ups.  You can see my public album of the race on Facebook.

The ‘worst’ of races… exactly ONE water stop at roughly mile 2.5/4.5 right at Lincoln Park (but it was well manned and the people were great)… not even ONE port-a-potty along the route.  Granted there were 6000+ signed up for the race, but having bathrooms at only the beginning and (I didn’t see them for sure, but I’m playing a hunch here) the end of the 5k… eh… maybe not the best laid plan.  it was 35.  No one wanted to use the port-a-potties anyway… not with a perfectly good mall RIGHT THERE.  The bathrooms in the food court at Tower City Center were horrible by the time the race started (Bear wouldn’t even use them) so it speaks to the fact that maybe runners aren’t always the most polite of people.  I got to the bathrooms inside the mall an hour before the race and only had to wait about 15 minutes.  By the time I got out, the line was three times as long.  Early is good.

The best of races… well, nothing can ever beat Disney, but this one was better than some I’ve run.  The people were great.  The photographers stayed until the last runner crossed.  The finish line could have been more “woohoo” for the 10k people.  The 5K people got a full arch to run through… but the clock on the finish line pictures for the 5k was dark so they didn’t have even rough proof of crossing time.  It was nice to have my picture (another HUGE bonus… the pictures are FREE and up and available the same day as the race… go figure!!! awesomeness) of me crossing actually be taken for a change.  Usually (since I’m so lame and only the first half of the pack matters anyway) the photographers are gone gone gone before I cross.  It’s really nice to know that the people who aren’t making any money on the pictures actually care enough to get the last runner crossing.  I don’t know if they realize it or not, but it really really matters… I think it matters more if you are DFL than if you are TOTALLY AMAZING and have your own pace entourage and you finish first.

The medals are huge and heavy and have the date embossed deep into the back of them.  Yay Bling.  Warm Ovaltine is yummy.

As for me and the race… It was awesome to be able to ‘run’ the streets of Cleveland neighborhoods and be able to take in some of the character.  Tremont is artsy fartsy and interesting.  Oddly enough, if I were to have to live IN Cleveland, I think I would consider living there.  In retrospect, I wish I had known how to get around when I was here my first month, I probably would have tried walking to work from the apartment.

I know that most people do the races for the race itself.  The guts and glory (and to have the pacer for the lead racers snarl at you for being too close to the center line).  I do it for the experience of what I see and to challenge myself.  I wish more 10Ks had bling and I would maybe cut my race distance of choice from halfs to 10ks.

I finished 67th in my age group.  1332 overall.  I’m pretty sure this was a personal best for me.  Better than the numbers, I felt really really good by the time I crossed the finish line.  Stinky, sweaty and cold, but feeling really good.  My jingle bells were a hit.  So were my arm warmers (mental note, roll up the arm warmers before you get your warm ovaltine… soggy glovies suck)

And the morning after the day before?  Hips ache a little, but not badly.  A hot bath made the shivers from the damp clothes go away.  I’m TOTALLY looking forward to doing the race next year.