Okay… so… I’m a little odd.  I’ll admit it.  If you have read many of my entries, you will have gathered that already.  Over the last couple days I have been haunting a website (Operation Beautiful).  Along the same lines, I have been talking to an awesome person in Cape Town South Africa (Human Kind is the facebook name) who is trying to decide if being a little different is worth taking the chance… if putting yourself out there to be kind to people, even if you don’t know the people, is really worth the risk… the risk of being ridiculed… the risk of never knowing what the change is that you are bringing to the world.. if it is worth it.

So today I embarked on a new adventure.

I started writing motivational stuff on sticky notes and posting them in random places. 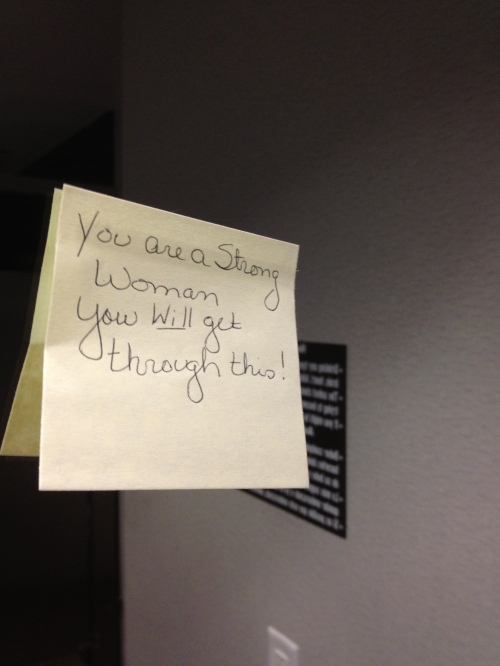 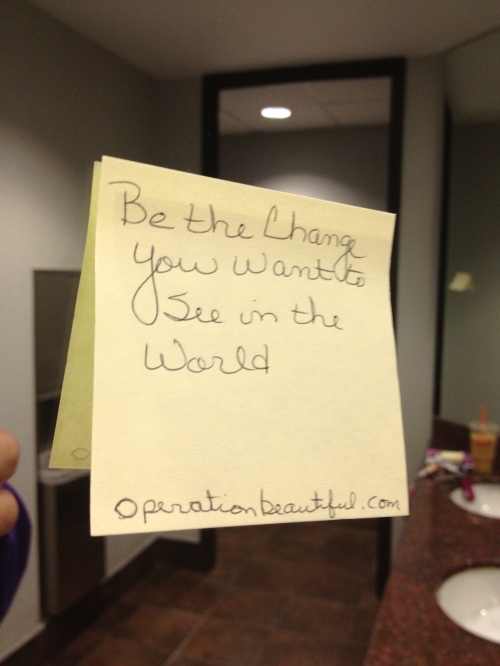 For the first three, I actually did what the basic original idea suggested… I placed them in the women’s bathrooms to bring a boost to women’s self esteem. These three pictures are my first three tentative attempts.

Later, I put a few more in the women’s bathroom, on the backs of the stall doors.
All of them disappeared.
I don’t really know if anyone took them or if the cleaning lady took them down.
I did go later to talk to my friend the HR lady to make sure I wasn’t going to get into trouble for putting them around the office floor. She said that she saw the ones in the bathroom, decided to go to the website, and didn’t think it was a bad thing. No one had complained and no one could take them as offensive so I should be okay.
So I made a few more and dropped them off on the way out. I put one by the elevator button in the office. I put one in the elevator of the parking garage and one on the computerized parking meter thing where it would be unobtrusive.
My adventure is going… now… to see where this adventure takes me.
Tomorrow I buy the Operation Beautiful book (electronic version) online.

This entry was posted in motivation and tagged motivation, operation beautiful. Bookmark the permalink.