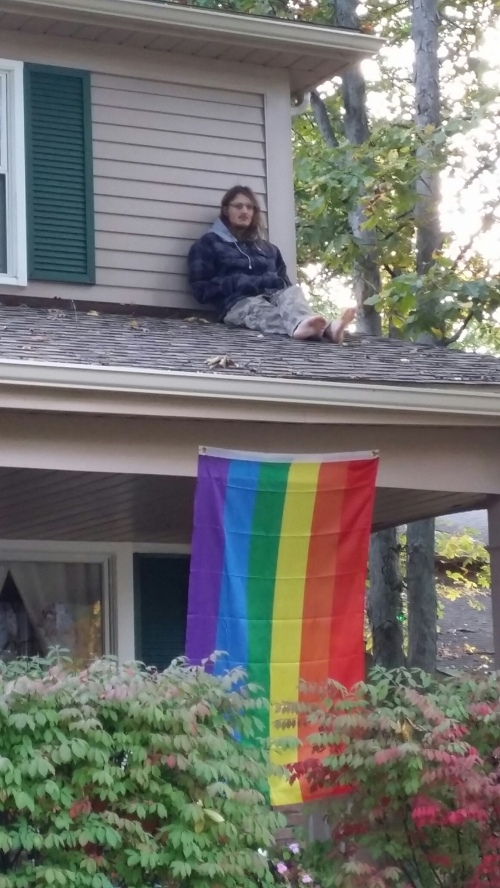 So… here I am (again) sitting on the front porch listening to the front yard sounds. Yeah, yeah, yeah, I know. I be here a lot doing this. But it is a wonderfully peaceful place to be. I will miss being able to do this when it gets too cold. I will still sit out here but I anticipate that being for much shorter periods of time. There is a neat wind storm going through periodically… it makes the wind chimes sing beautifully. It makes the whirly-gig’s head spin around. It makes the flags dance. The sun is embarrassing the sky beautifully. Peanut and I are in our favorite spots. The squirrels are a trifle irritated (or it sounds that way) because there are dozens of acorns (oak nuts) and hickory nuts hitting the porch roof and flying from the trees…

The house is slowly starting to wake up and come alive.

This morning I’m thinking about failure, and what seems to define failure to people.

My son, who has been valiantly trying to fight the good fight in Texas for nine months, came home yesterday. He and his fiance moved up from Texas to be in Ohio… to work on life… to go to welding school… to begin the next chapter.

In Texas he had a couple of jobs and for one reason or another they ended up not panning out. But he kept trying. He kept fighting. I think partly it was a sheer determination to be on his own. I think partly it was bull-headednes to prove everyone who said he couldn’t do it wrong. He promised me, though, when I left to come north, that if he needed to come home, rather than living under a bridge… rather than living in a tent and freezing through the winter (nights get cold even in Texas) he would come home.

Saturday (almost a week ago now) I got the call. He was in tears. He sounded so broken. It broke my heart. He was still fighting to not have to come home. He was determined to stay with his true love and not have a long distance relationship if there was any way to not. I’m proud of them both. They talked it out. They cried it out. They both made the most incredibly difficult decisions they could make. Sunday, I got the call… come get me… rather… come get us. Because he has chosen Adam, they are pretty much disowning him… at least until he is ready to admit defeat and come to his senses and come back home to them.

I see so many changes in both of them since we left for the great white north. Both of them are more relaxed… more natural… more normal. It’s wonderful to see. They fight, they get bent, they talk it out and they move on.

Sometimes a change is just a change. Sometimes it is necessary. Failing would mean falling and not finding a way to get back up… or refusing the help someone wants to give you. Hearing the defeat and fear in his voice on the phone broke my heart. Seeing him eat and hearing the laughter in the house is wonderful.

It is good to see him planning for a future, finding something that seems to fascinate him and being willing to work towards it. The reality today is the reality of today. I’m more glad than ever, now, that the house we bought was waiting for us to find it. More and more I see it was meant to be.

This entry was posted in rambling and tagged defeat, failing. Bookmark the permalink.

One response to “Defining Failure…”