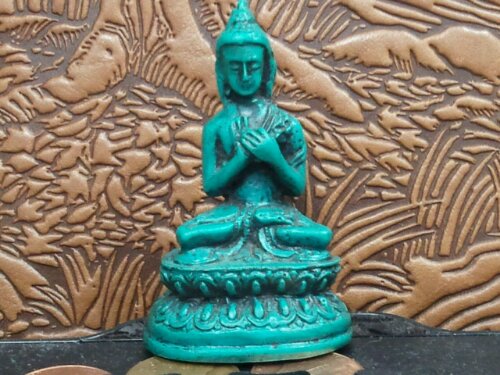 A kid from work went home to Nepal for Christmas.  When he came back, he brought me back something from there… this little Buddha.  He brought it to me this morning… It looks way bigger in the picture, it is probably an inch and a half tall.  I decided to do a little digging on Buddha since I know that he was really an interesting man who was very wise.

I found this on The Basic Teachings of Buddha

1. Nothing is lost in the universe

The first truth is that nothing is lost in the universe. Matter turns into energy, energy turns into matter. A dead leaf turns into soil. A seed sprouts and becomes a new plant. Old solar systems disintegrate and turn into cosmic rays. We are born of our parents, our children are born of us.

The second universal truth of the Buddha is that everything is continuously changing. Life is like a river flowing on and on, ever-changing. Sometimes it flows slowly and sometimes swiftly. It is smooth and gentle in some places, but later on snags and rocks crop up out of nowhere. As soon as we think we are safe, something unexpected happens.

Once dinosaurs, mammoths, and saber-toothed tigers roamed this earth. They all died out, yet this was not the end of life. Other life forms like smaller mammals appeared, and eventually humans, too. Now we can even see the Earth from space and understand the changes that have taken place on this planet. Our ideas about life also change. People once believed that the world was flat, but now we know that it is round.

3. Law of Cause and Effect

The law of cause and effect is known as karma. Nothing ever happens to us unless we deserves it. We receive exactly what we earn, whether it is good or bad. We are the way we are now due to the things we have done in the past. Our thoughts and actions determine the kind of life we can have. If we do good things, in the future good things will happen to us. If we do bad things, in the future bad things will happen to us. Every moment we create new karma by what we say, do, and think. If we understand this, we do not need to fear karma. It becomes our friend. It teaches us to create a bright future.
The Buddha said,

“The kind of seed sown
will produce that kind of fruit.
Those who do good will reap good results.
Those who do evil will reap evil results.
If you carefully plant a good seed,
You will joyfully gather good fruit.”
Dhammapada

I’m not sure I really believe the Karma part of it… because I really don’t think that a lot of things that happen to a lot of people is because they deserve it… in fact I’m pretty sure a lot of things happens despite the fact that the people it happens to don’t deserve it… but I guess this kind of lends into the whole reincarnation thing, too… maybe it’s that someone in a past life is supposed to have done something to deserve it in this life…

Walk gently and do no harm.

This entry was posted in Post A Day Post, rambling, reflection and tagged buddha, postaday2011. Bookmark the permalink.